How to Make a Rock-Paper-Scissors Game in Java | Beginner Java Project
POSTED ON SEPTEMBER 15, 2022

How to Code an Easy Rock Paper Scissors Game in Java

Let's use Java code to make a rock, paper, scissors game! This classic game is possible to code in Java using basic concepts. If you want to learn more about making games in Java, this tutorial can be good inspiration for how to make simple games with code before getting into any complicated graphics or game user interfaces.

All you'll need is basic familiarity with Java, and experience using foundational concepts like conditionals and loops. Watch the tutorial video to see how we code this game step-by-step, and continue reading this post for more details.

Who is this project for? 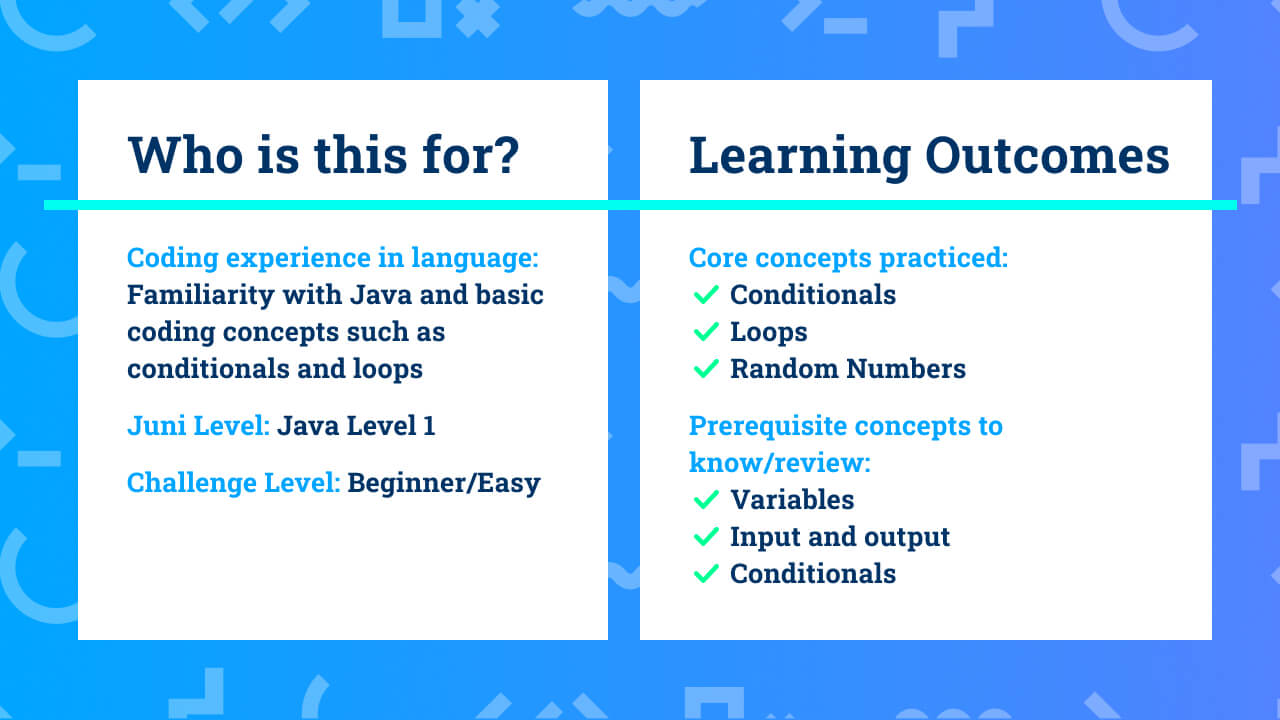 This project info and learning outcomes summary will help you decide if this project is right for you.

This project falls under our Juni Java Level 1 coding class for kids. This beginner Java tutorial is for students that want a easy challenge project, about 50~75 lines long. You should review variables, input and output, and conditionals beforehand to get the most out of this project.

Some other projects you can try first for more practice with beginner Java are our Java tic tac toe game and code a Maze Runner in Java tutorials.

For learning outcomes, you'll get a lot of practice with conditionals, loops, and random numbers.

You can also view my project solution code if you get stuck.

Things to keep in mind:

Steps to Build this Project:

How do we do each of these steps?

Step 1: Ask the user to enter in their move.

Step 2: Check if the user entered a valid move.

In order to randomly generate the opponent’s move, we can use Math.random(). Math.random() only generates a decimal in between 0 and 1, including 0 and excluding 1. But, since there are 3 possible moves in rock, paper, scissors, we need 3 possible random numbers! How can we do this?

Hint: We can use Math.random() * 3 to generate a random number in between 0 and 3, including 0 and excluding 3. We can then cast this value to an int so that our random numbers only include 0, 1, and 2 – no decimals in between.

Now we need to translate our random number, which can be 0, 1, or 2, into a String opponentMove which is either rock, paper, or scissors.

Step 4: Use conditionals to figure out if you won, lost, or tied.

Let’s first check if it was a tie. If the opponent’s move was the same as your move, then it is a tie.

Hint: We can use .equals() to check equality between two strings. If myMove is equal to opponentMove, then it is a tie.

Step 5: Use a loop to continue asking the user for their move.

We want to keep asking the user to enter their move. How can we do this?

Hint: We can put all of our code for asking the user for their move, checking if they entered a valid move, randomly generating the opponent’s move, and figuring out whether the user won, tied, or lost in a while(true) loop.

But now our game will run forever! How do we make the while loop stop?

In order for a while(true) loop to stop, we need a break statement in the body of the loop. We can ask the user if they want to quit the game.

Step 6: Check if the user wants to quit.

Challenge Yourself with Extra Features

Check out the bonus extended project features below, or see the solution code if you get stuck.

Add a score counter that counts the number of wins and losses.

Thanks for watching and hope you had fun making this Rock, Paper, Scissors project with me!

Every week, we’ll be posting project tutorials like this one, for different coding languages and experience levels.

Visit our coding projects blog page to find our other tutorials in more coding languages! You can also subscribe to our newsletter using the form to the right of this page for more updates on our programs and newest coding tutorials.

Looking up your coding questions is one of the best ways to learn! Another great way to learn is from an experienced coder or instructor.

Read more about our online coding classes for kids, or speak with a Juni Advisor today by calling (650) 263-4306 or emailing advisors@learnwithjuni.com to learn which course is best for your student’s coding journey.

Irith Katiyar is a high school senior who's been a Juni student for the past 4 years, and is a Juni summer intern. He started out in the AP Computer Science course barely knowing how to code, then took USACO and Web Development with Juni. He now loves coding, and has published apps on the AppStore! Irith wants to study computational biology to combine his CS knowledge to solve problems in biology. He loves to play squash, dance, play Mario Kart, and meet new people.

Improve your Scratch sprite movement with this more advanced method. Make your sprites more smooth and realistic with this code.

Code a multiplayer tic-tac-toe game in Java! This beginner Java tutorial is a more challenging one, but we'll show you step-by-step how to build it.